Wow! So much has happened in the past week! It’s a good thing I’m allowed 2.5 hours to email now! Ok, so I’ll start with the last Sunday in the MTC. It was fast Sunday, so we had mission conference with everyone in the MTC. I had to get up and bear my testimony in front of everyone. It went really well! Then after the conference, we split up into branches for our fast and testimony meetings.

I mentioned last email that two missionaries arrived from Congo, Africa. We didn’t really know anything about them, until now. One of them, Elder K., got up in fast and testimony meeting and explained how he came to be here with us. He was a convert to the church. After his father found out he was investigating the church, his father took all of his belongings and burned them. (His father is a pastor in a local church, there, and was really mad at him). He didn’t know what to do because he knew the church was true; but he also didn’t want to lose his father because he meant so much to him. After lots of praying and fasting, Elder K. knew he needed to be baptized. When he was baptized, his father disowned him and kicked him out of the house. The Bishop of his ward took him in. He knew he wanted to serve a mission, so he put in his papers and there he was.

His story hit us all so hard. He had a French translator standing up with him and she couldn’t even translate because she was crying. At this point, we were all crying, even the big Tongan guy from New Zealand, who looked like he had never cried in his life, was crying! After him, I went up and broke down in tears and so did everyone else who went up after me. Elder K. had given everything he loved so he could join the church and bring it to other people. His story just shows how little most of us gave up to go on a mission compared to him. And giving up 2 years is really nothing compared to what Jesus Christ did for us in the Atonement. It’s only a tiny fraction.

On Monday we had field orientation all day and then we left the MTC early Tuesday morning. The bus took us straight to the mission presidents’ house. (We were a group of about 8). The mission president lives in a super nice community in the middle of the city on a hill. His neighborhood is all grassy with lots of trees, which is unusual for the city. From his house you can see all of São Paulo. It was super cool! We had a little orientation and met his wife and one of his daughters. (His other kids were at school). We ate a delicious lunch and had interviews. I’m glad my mission president is from Utah so I could have a break from Portuguese and be interviewed in English. haha. He is super awesome! I love him. I wouldn’t want any other mission president. After we took some pictures, we went to the mission office. When we walked in, everyone was standing and cheering for us. haha. It was awesome! I found out I would be trained by Elder M. for the next 3 months. He’s super awesome! He’s from Oregon. We are in a super chill town that’s more rural and very green. We joined 2 other missionaries already serving here because missionary work is exploding in this area. The people here are so nice. Everyone we stop will talk to us.

Church on Sunday was great. It’s a ward of about 80 people. The mission president and his family came because they were giving talks! I had to get up and introduce myself and bare my testimony. I’m glad I already had a chance to practice in the MTC!

So we were walking down by the lake on Friday and a drunk guy stopped us. He said he was baptized when he was eight, but hadn’t gone to church in the past ten years. He told us he wanted to come to church! I wasn’t sure if he was serious or not, but we still invited him. He said right before we walked by, his friend asked him about the church and why he didn’t go anymore. He told his friend he wanted to go back, but was waiting for someone to help him back into the church. And one minute after that is when we walked by! And he showed up to church on Sunday all by himself! After church, he said he knew everything was true and he was never going to miss church again. He said he was also going to get his girlfriend to come next week. We went and met with him last night and he said he already gave up drinking and started reading the Book of Mormon again. We have an appointment tonight to go back and teach both of them. We need to focus on getting them married so we can baptize his girlfriend. He said no matter what, he knows the church is true and will even break up with his girlfriend if she doesn’t want to live the gospel. What a miracle! Before we left the MTC, we were promised we would see many miracles in our mission. I didn’t think it would be the first week though! haha.

We live with Elder M. and Elder F. They are both Brazilian and are super nice and funny! Its really fun teaching them English. haha. They are also both converts.  About 75% of Brazilian missionaries are converts. Most of them have only been converts of 2 or 3 years, but their testimonies are SUPER Strong! Most of us have it easy being born into the church.

Elder F. has a funny conversion story. So his member friend from school hid a Book of Mormon in his backpack. When he got home he had no idea where it came from, but he picked it up and read the first 200 pages in 2 days! That’s really impressive. (I don’t think I could’ve done that!) He said he knew it was true and he wanted to find out where the church was that the book belonged to. He found the church and went early Sunday morning so he wouldn’t miss it. He waited over an hour until someone came to open up the gate for 9 o’clock church. It was the second Sunday of the month, so it was just a normal meeting. But, Elder F. noticed people were getting up from the pews to give talks, so he figured anyone could! In between speakers, he quickly got up before the other speaker could get up. (Remember this wasn’t a fast and testimony meeting haha.) When he got up to the microphone, he held up the Book of Mormon in his hand for everyone to see and said, “THIS BOOK IS TRUE! I READ 200 PAGES IN 2 DAYS AND I KNOW ITS TRUE!” He continued talking for a few more minutes and then sat down. He said while he was talking, people were looking around at each other because they didn’t know who this kid was. No one talked to him for three weeks after that time because they thought he was already a member. hahahaha. He got baptized and here he is a year and three months later. Incredible! Sometimes I wish I had a cool conversion story to be able to tell like all these missionaries do. haha.

There is still so much more I could say, but wouldn’t have enough time to say it all. Thanks for everything.

I love you all! 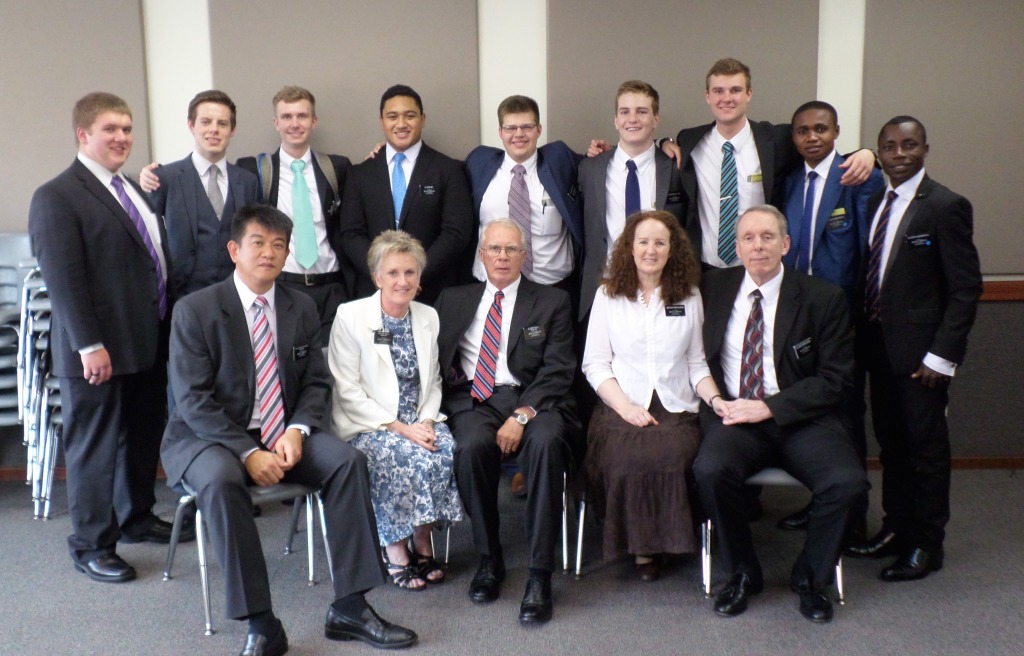 My Zone in the MTC